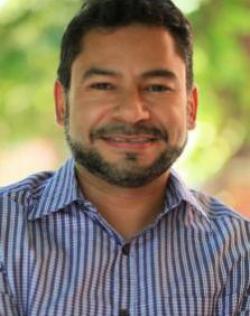 Edgar Rodriguez, uncertain where his education would take him, was encouraged by his family to leave his native Mexico City and pursue the type of higher education that would provide him with the skills to develop a successful career.

Buoyed by his family’s support and his never-give-up attitude, he successfully became a U.S. citizen and then dedicated himself to his educational career.

Rodriguez earned a bachelor’s degree in biochemistry from the University of New Mexico’s School of Medicine and master’s degrees in Latino American studies and public health, both from San Diego State University.

He has gone on to collaborate with scientific researchers and serve as a community health educator. He even developed a health and safety manual for low-wage immigrant workers in California.

“We’re basically trying to get Latinos to increase their rate of colorectal cancer screening,” Rodriguez said. “Right now we’re at the stages of kind of designing different studies and writing up grants.”

Uncertain of which goal to pursue next—continue international travel or pursue a doctoral education—Rodriguez was encouraged by his mentor to apply toÉxito! Latino Cancer Research Leadership Training, which aims to increase research in Latino cancer disparities by encouraging master’s-level students and health professionals to pursue a doctoral degree and a cancer research career.

He said the program is serving as both a foundation and a guideline for him as he decides whether to pursue a doctoral degree and/or cancer research.

“I think listening to some of the investigators that spoke [at the 2012Éxito!Summer Institute], just to find out about their own journey, with their own experiences, how they got there…to me they seem a little more human. Before I had this picture that these people were like brilliant, they knew exactly what they wanted to do, they were so focused. To me that was kind of refreshing,” Rodriguez said. “And also being with my peers and the other participants here, you get to know them, just to listen about their own journeys, it’s important, too. I think we can learn from each other a lot. That’s what’s got me more interested in becoming a doctoral student.”